It’s taken me a couple of days to gather my thoughts after the Fleet Half Marathon. Not because I didn’t have a good race though the time wasn’t what I hoped it would be but more because I have to get my head around deciding how much to appreciate looking back at Fleet or whether I just look forward to the next event in Liverpool.

Don’t be looking in this blog post for answers to that. I’m just going to appreciate both for now.

Before I get to Fleet, now I’m going to look back at what brought me there. Since my last post I had a short run to play basketball, at least some running during that game, a third run in Jersey over a quarter marathon distance and two short ones in Reading.

Then I did the Sweatshop 10 mile training run and things went downhill from there. I hurt my knee during the course of that run and made it much worse when needing to run to the cashpoint later that afternoon. Since then walking had been particularly challenging and relatively speaking running was actually easier for some reason.

I had more or less a week’s rest then a tentative return to running on a Friday morning. Then a Saturday morning run with Jean, following which I also joined the final Sweatshop training of 5 miles on the Sunday before the half marathon. I found the start of that run quite difficult but settled into a pace before very long and it turned out to be a pace that was about what I would hope to do for the half marathon with my heart rate coming in at a reasonable level too.

That run gave me loads of confidence for the half marathon. However I also knew that I hadn’t done the miles I was hoping to do and ultimately my knee was not as good as I would hope.

So onto the Fleet Half itself. 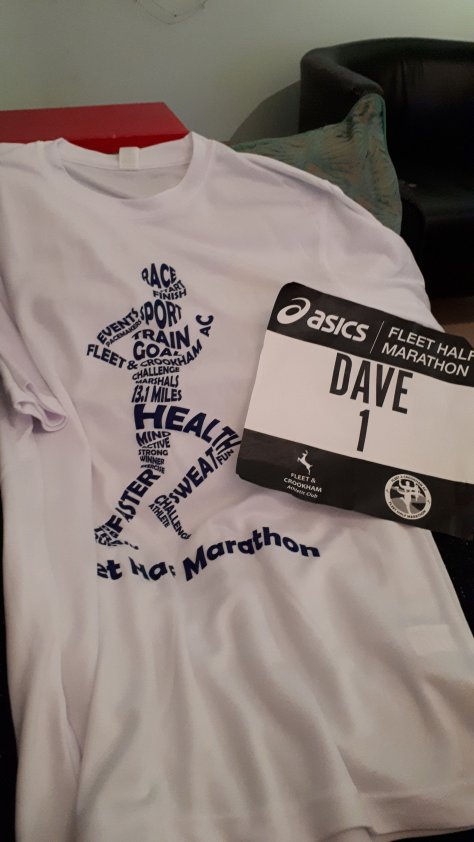 Travelling to Fleet went smoothly enough although there were a couple of issues with the hotel but really nothing that would really affect the weekend when looking back.

I lined up right next to the 2 hour pacers and once the race started stuck with them for the first 3 miles or so. However I knew soon that it just was not going to be a pace I could achieve for 2 hours so I dropped back and slowly made my way back in the field.

As before when I’ve had less good runs, I resolved to just enjoy it. Yes, I took a few photos. I high-fived lots of kids. I overtook an armadillo – as you do. I just had as much fun as I could.

As dropping back I found that the 2:10 pacer group was still too quick as well and eventually during the last mile or so the pacers and the 2:20 group just about caught me up. I found something for the sprint finish, oddly just faster than last year’s race, and ended up just ahead of the pacers, coming in at an official finishing time of 2:19:54.

Once again the atmosphere at the finish was excellent, and I was greeted by my wife carrying a very welcome pint of lager.

Ultimately though my 20th time passing the half marathon distance was not fast by my best standards. But I have to be realistic that I was not fit to be performing at my best. So I have to look forward to the next one – the Rock ‘n’ Roll Half in Liverpool in May.

But first recovering and making sure my knee is as good as it can possibly be is way more important. Rest comes first and then we’ll see what targets follow.