Earlier this week a colleague of mine made what really was a foolish comment. He clearly doesn’t know that asking me any question with an ascertainable answer, but one which I didn’t readily know, was only going to result in research and finding said answer.

The question was, after having been given by me the honest and brutal truth about my Fleet Half Marathon – “do you know how many places you’ve been to with running?”.

On the spot I guessed 15-20 and named 14 in no time at all. But that was never going to be good enough. Therefore, based on stats from Veloviewer, the below is the complete list sorted by distance from Jersey and noting the approximate number of runs.

Guernsey 1 (just a half marathon. Despite formerly visiting Guernsey every week I’ve still only run once there – in their half marathon)

Bramber / Shoreham 1 (as above but replace snow with rain. Lots and lots of rain)

Fleet 2 (the last two Half Marathons)

Bexhill-on-Sea 3 (two Halves and my best ever 10k)

Silverstone 3 (my first three half marathons)

So that’ll be 27 locations then if we call all of Central London one. A running life has certainly been varied.

Further below is a copy of a response I gave in a closed Facebook group to the post: “Have you achieved your ultimate running goal?  If so, what is it?  If you haven’t achieved it yet, what is your goal?

What have you achieved that you are the most proudest of to date?”. My response seemed substantial (i.e. rambling) enough to justify putting it here. People shouldn’t allow me to talk freely about running, or at least they should accept the consequences if they do start to read my stuff. You, dear reader, evidently get it because you’ve had to click on a link to come here, but poor unsuspecting Facebook users probably aren’t used to lines and lines to wade through. At least, when put back in context, all of the readers there are runners. Anyway here’s my reply.

I’m not sure I have an “ultimate” running goal. Not “ultimate” as in when I’ve done it I’ll I know I’ll have achieved everything I want to I’m running. There’ll always be something else, another race or challenge. I think anyway.

My greatest achievement to date though was my sub 2 hour Half (actually 1:56:35) at Liverpool R’n’R this year. I then moved on to the sub 50 10km which I did in a local event a few weeks ago. I suppose my current goal is running under 50 minutes at the Poppy 10k in Bexhill-on-Sea next month – as that’s an event that should count on Run Britain it will mean a little more than the local event where I’ve set my PB now. I know that’s a little bit wrong as 10k is still 10k whether you’re chip timed or not but my name didn’t appear in the local event’s results due to a time recording mix up so in my head there is a little asterisk next to that performance.

It’s that last point that got me thinking. The 10k in question was, of course, the Jayson Lee Memorial 10k, and yes it was, and still is, my PB and yes I was left out of the official results although I think I know what my official time should have been.

The organisers really couldn’t have been sweeter and nicer about the whole thing. I would certainly do that run again if I am available to do so in future years. So I’m really keen to not sound ungrateful for the organisation of the event.

But the reality is due to the mix up, the run does have a little asterisk next to it in my head. Even in these very pages I list my time for that run as “49:33 (est.)”. (Oh did you not know there’s a list of my competitive runs and parkruns around here? There’s a couple of links at the top with those. Go and have a look after as I’m proud of lots of them).

OK in my post last week I did say then that I would probably end up doing maybe two or three marathons in total ever, and it didn’t take long for me to sign up for number two. 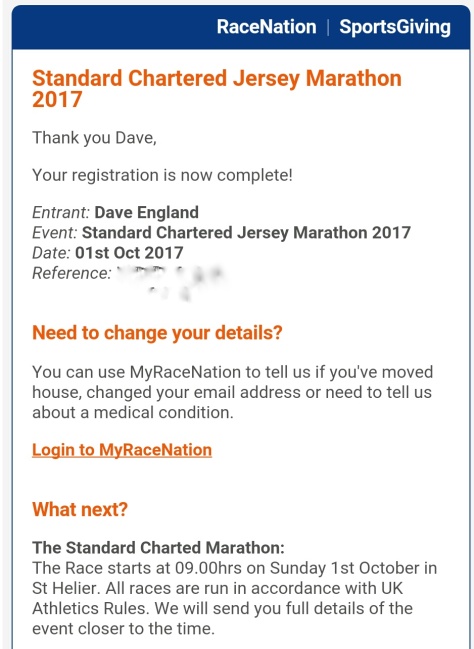 I might have already entered number three too but for that I’m still going to have to wait and see the outcome of the London Marathon Ballot. I might find out before I go on holiday but possibly not.

A text this morning from a charity asking if I’d got a place briefly made me question whether they knew something I didn’t but after hearing about someone else getting the same message it put that out of my mind.

I’m approaching this year’s London ballot differently. I’ll be happy to get in but won’t be disappointed if I don’t. I’ve done a marathon. I’ve ticked that box. Yes, London has an extra pull about it but I think I’ll just keep applying until I get in – or until I’m 70 if I’m still running the same speed as I’ll qualify then with a Good For Age time!

So after a conversation over the weekend with my wife who did such a great job supporting my efforts over the past few months and especially last weekend, we decided I would join her in entering the  Jersey Marathon in 2017. And now it’s done.

The Marathon doesn’t have the same fear anymore as it might have done before I completed one. But that doesn’t mean that I’ll be completing lots more of them. I just don’t want that training workload again. I’ll accept it once or twice more but no more. But last weekend confirmed (if it were actually necessary) that I have the determination to push through and finish. Next time I’ll hope for better and quicker but I can be pretty confident I’ll get round.

So another race means that next year’s calendar is filling rapidly. Reading in March. London hopefully in April, two events in Liverpool in May, probably the Durrell Challenge again in May then Jersey again in October. I’ll not be doing the same number of flights next year to get to all of these races but I think I’ll enjoy it all more for that.

Slight fall this time which considering the focus on long runs rather than speed isn’t all that surprising.

A little improvement this time round. Happy enough 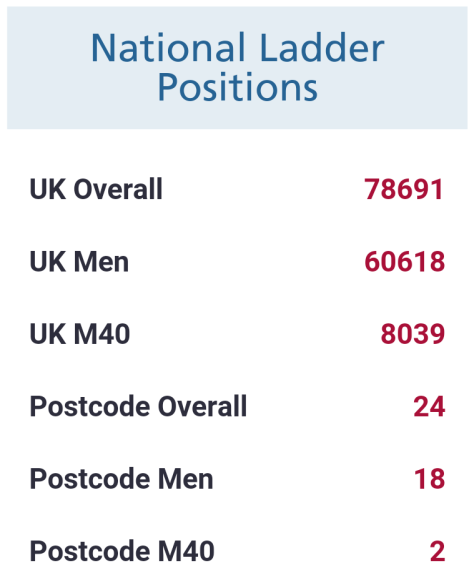 In keeping with my slightly worse score this month, my national ladder positions are down. 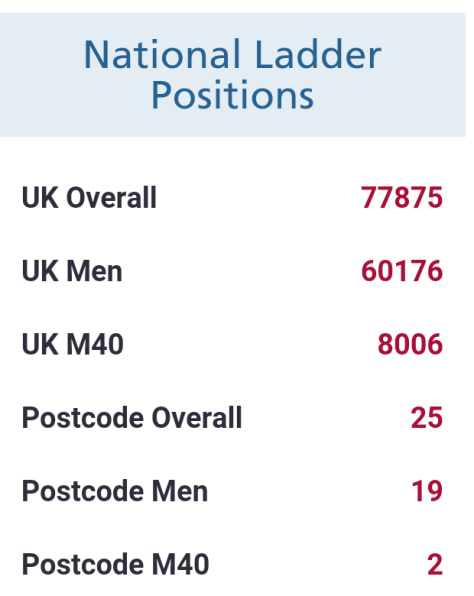 I’m starting to write this in the back of taxi in the morning while somethings fresh in my mind and will probably finish at the airport later so excuse me if it sounds a bit disjointed.

We had an interesting pilot today. Leah Betts, LSD and “Barts” were the subjects of discussion between the two pilots before we took off this morning. Pilot with an interest in LSD – yeah that’s what I want to hear about in your little coffin shaped plane!

It was a perfectly nice journey though, if a bit blustery out and a little late but all good though. Â The working day has been really good and very productive indeed.

Because I’m probably going to be spending plenty more days here (Guernsey I mean – not the aforementioned taxi or airport) I thought at lunch time I’d pop out of work and explore the town centre.

I haven’t really been out and about in Guernsey in years so it was nice to have a leisurely wander. Interesting to see what they’ve done with the old market. Having a HMV store at one end totally reminded me of the old Tower Records by Piccadilly Circus. Obviously not in terms of size but just something about it being set slightly down from the road I guess. Well it makes sense to me.

Have to say these might be longish days here but they are tending to be very good days. That said working days in Jersey are pretty good right now too.

Anyway enough waffling from me for another week probably. Have fun!